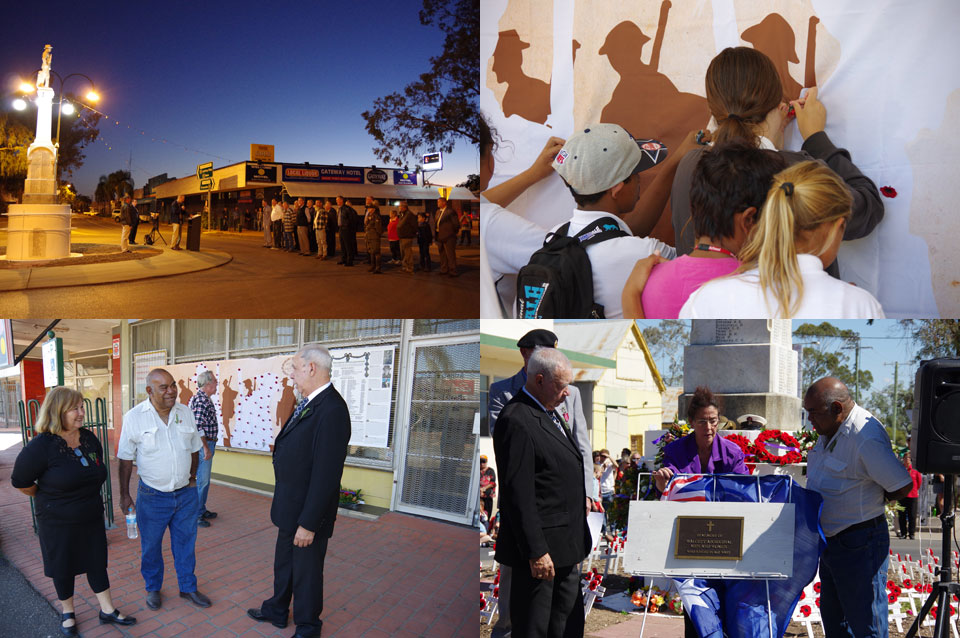 Dharriwaa Elders Group held a special ceremony with school students and community to commemorate WW1 and remember the contribution of Walgett Aboriginal men who served in that conflict, on Friday 24 April 2015.

In 2014, DEG produced after extensive local and other research, a banner presenting an honour roll of Walgett Aboriginal servicemen and women. In April 2015, DEG conducted a ceremony to remember the Aboriginal servicemen and women they had found out about, but particularly those who had served in WW1. Walgett High School students attended, alongside some Elders and community members on the main street of Walgett, in the afternoon after the Elders Council's monthly meeting. A moving meditation was read, to the beat of the clapsticks, as participants pinned their poppies on the WW1 commemorative banner placed at the front of the Elders Centre, and then passed through the ceremonial smoke from the badha and rosemary.

On Anzac Day, Clem Dodd, Speaker of the Dharriwaa Elders Group, laid a wreath on behalf of the organisation, at the cenotaph. He and Richard Lake later in the ceremony unveiled a plaque that DEG had requested be erected in Walgett's Remembrance Garden. The plaque had been prepared by the Sub Branch of the Walgett RSL Club, and reads "In Memory of all Walgett Aboriginal men and women who served in all wars". Representatives of the Sub Branch who had served in Vietnam had ensured that the plaque was produced, and in his speech, Robert Ward explained that they did so in order to recognise for the first time in Walgett, the contribution of Aboriginal servicemen and women.

Below is the meditation from DEG's ceremony:

We are together here this afternoon to honour the service of Walgett Aboriginal service men and women who have fought for their country. (pause)

In particular we honour the service of those who served in World War One. (pause)

There may have been more from Walgett who went to WW1 but these are the names of those who we know about today. (pause)

We remember those who were killed overseas and whose remains are still there. Thomas Dodd never returned. We feel for his family who never had the chance to attend his funeral or grave, and who will still be feeling his loss. (pause)

We feel for all the families who lost their loved ones in this horrific war. (pause)

We feel for the men and women who returned home from war after the damage they suffered – which wasn’t often recognized by their families and communities. (pause)

We are only now starting to recognize and understand the damage caused to people from stress and trauma. (pause)

We think of the horrors of war, the devastation it causes for people, families, communities, ethnic groups, countries. (pause)

We remember what war does to mari (men), (pause) wirringaa (women) (pause) and birrilii (children). (pause)

How can war ever be justified?