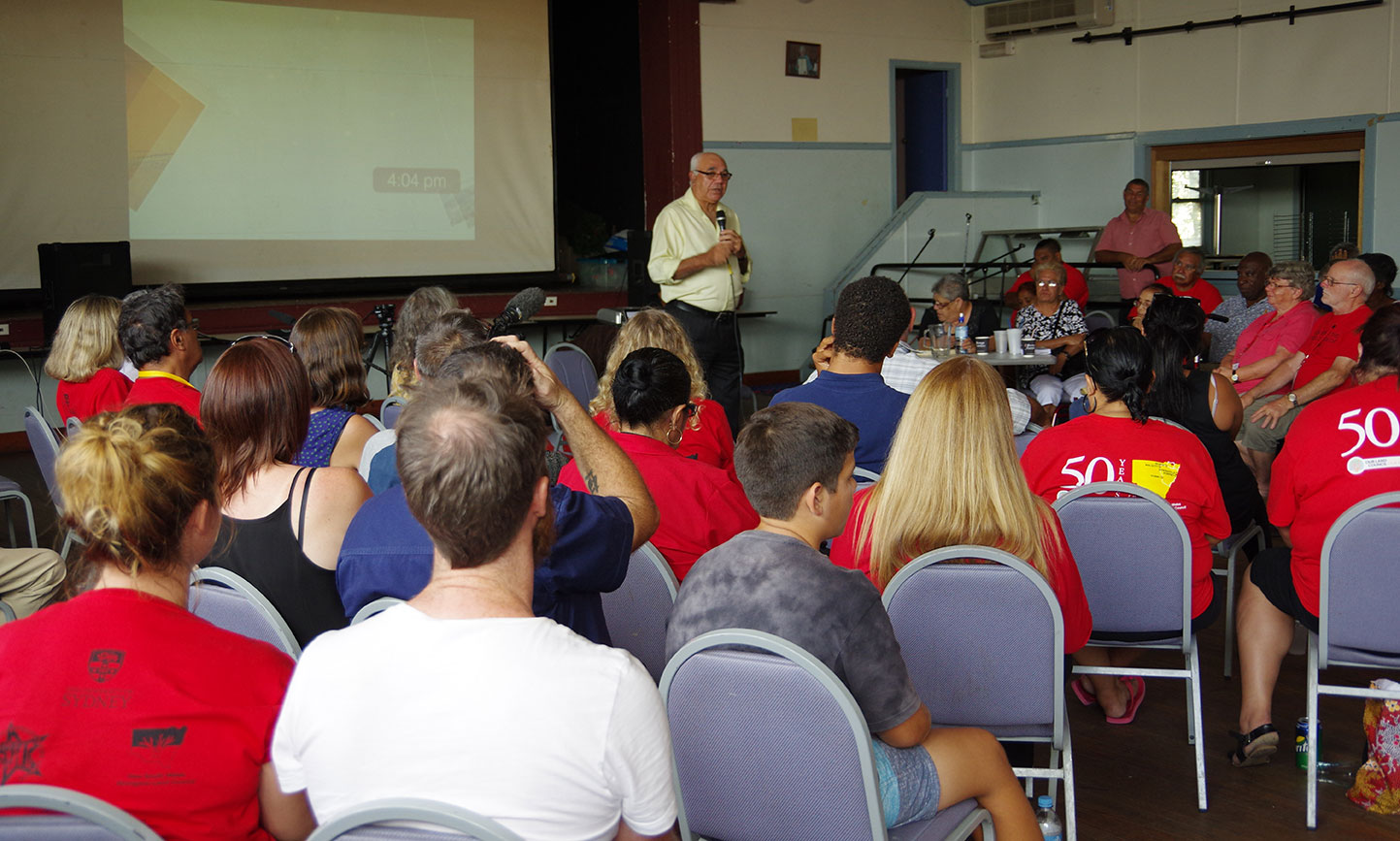 Rachel Perkins, Sydney University and NSW Aboriginal Land Council organised with the Walgett community a series of activities on the 19th February to commemorate the 50th Anniversary of the Freedom Ride visit to Walgett.

The Freedom Ride buses arrived in town at Apex Park, where the Walgett swimming pool is. Walgett school students marched up the main street with the original Freedom Riders and current Sydney University students, Walgett Shire Councillors, Rachel and Eileen Perkins (representing Charlie Perkins), Cynthia Rose (representing her father George Rose OAM), Ted Fields (representing his father Ted Fields), Phillip Hall (representing his father Harry Hall), Councillor Anne Dennis (representing the NSW Aboriginal Land Council), Elders who remember the Freedom Ride visit and community members who wanted to pay their respects, under the banner "Student Action for Aborigines" - a replica of the banner used in 1965. Many could not join the march as Walgett's midday heat was unsafe. After the march reached the Walgett RSL Club - the venue the Freedom Riders protested in front of in February 1965, Councillor Anne Dennis facilitated Elders to welcome the visitors to Walgett, and school students to perform welcome activities in dance and song. Rachel Perkins and Freedom Riders Ann Curthoys and Brian Aarons made speeches and the crowd learnt that three Elders from the United States (including Bob & Helen Singleton), were in attendance who had participated in the original Freedom Rides. Deputy Vice-Chancellor of Sydney University Professor Shane Houston, and the university's Student Representative Council President, Kyol Blakeney also made brief speeches, as did Walgett Shire Councillor Ian Woodcock and the Walgett RSL Club's current manager. Speeches were kept brief because most of the crowd were extremely uncomfortable in the February sun, reminding us of the heat endured by the thirsty Freedom Riders in 1965.

While many students retired to the oval for games and cool drinks, the Dharriwaa Elders Group hosted a yarning session with the Freedom Riders and Elders in the Walgett RSL Hall. Professor Bob Morgan, born and bred in Walgett, was invited to facilitate the session. The three Walgett Aboriginal women who had participated in the second visit of the Freedom Riders to Walgett in September 1965 when the colour bar was broken in the Luxury Theatre, Marie Peters, Lorna and Patti Hall were present. They were too shy to talk but their family members spoke on their behalf and they were cheered for their bravery and activism. The three US Freedom Riders spoke of their experiences and hardships during the American Freedom Rides, and helped the audience visualise the racism and tensions in the Deep South in the 1960s. Cynthia Rose spoke of her parents' activism and the fact that her father was a WW11 ex-serviceman who was prevented for most of his life from RSL Club membership. Eileen Perkins briefly spoke of her husband and acknowledged the contribution of Jimmy Little OAM. His daughter Frances Peters-Little was present and thanked Mrs Perkins for this acknowledgement. Bob Morgan spoke of his memories as a teenager when the Freedom Riders visited, and Michael Anderson and Phillip Hall spoke of Harry Hall and Walgett in the 1960s. DEG's Secretary Virginia Robinson set the scene early in the yarn. Many in the audience took time out to travel to Walgett from surrounding towns. Walgett Aboriginal leaders took time out from their demanding jobs, to be present and reflect on the Freedom Ride event and the impacts they have built upon in Walgett. Sydney University students listened and the videographer from Dharriwaa Elders Group was joined by Ellie Gilbert, and two Sydney University student videographers Yannis and Avril. Employed media from The Guardian, The Australian, The Sydney Morning Herald, SBS TV and NITV were present, along with other freelancers following the story. 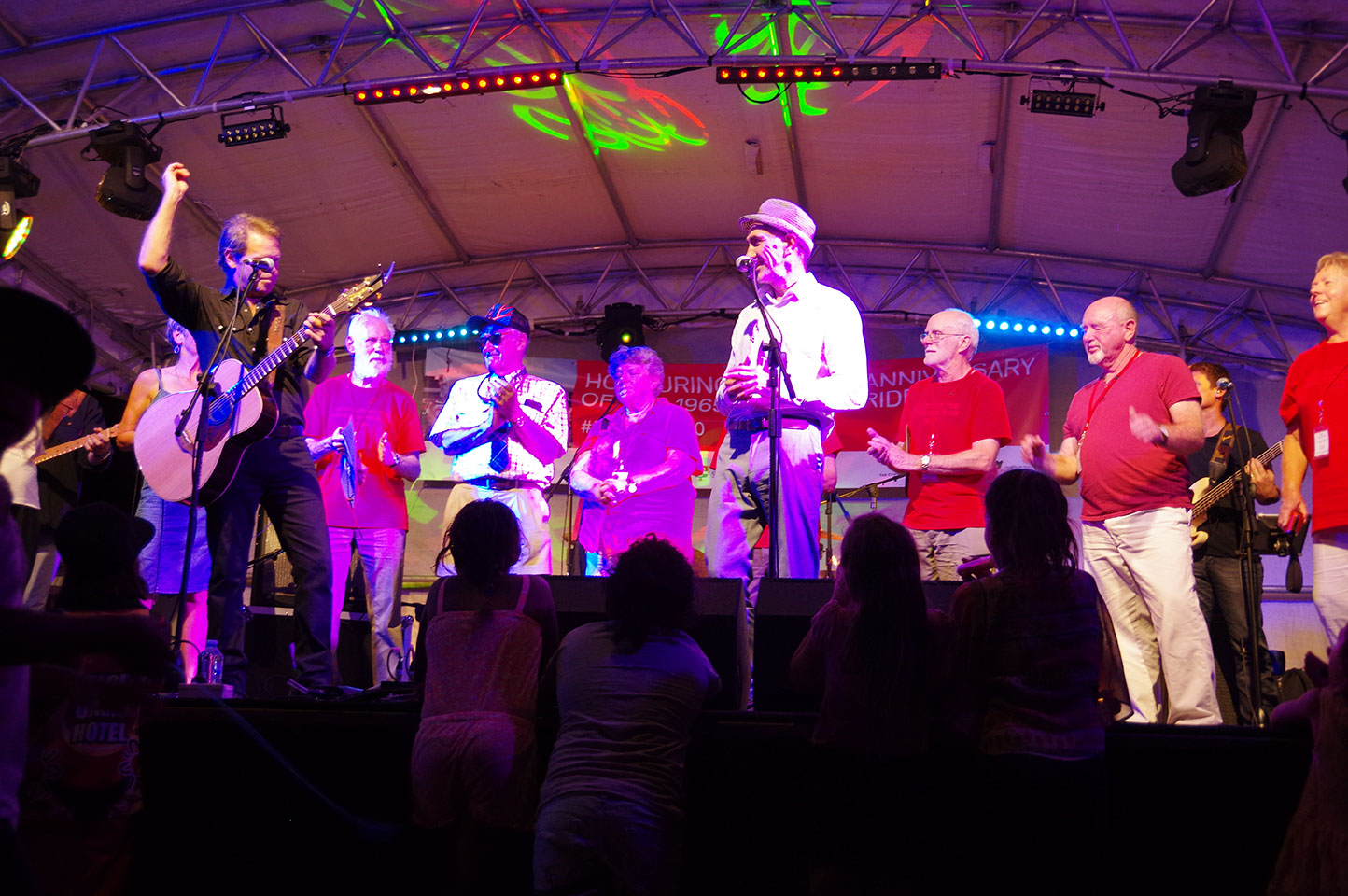 After the short media conference, most retired to the oval where a concert was staged by Troy Cassar-Daley joined by Paul Kelly. Locals were amazed with their good fortune! These legends of Australian music were preceded by a performance by the Walgett Community School's dance group and the "Collie Crew" who had travelled from Collarenebri. The concert finished with a very moving climax of the 1965 Freedom Riders joining Paul Kelly and Troy Cassar-Daley for Troy's new song "Freedom Ride", from his just-released album of the same name.