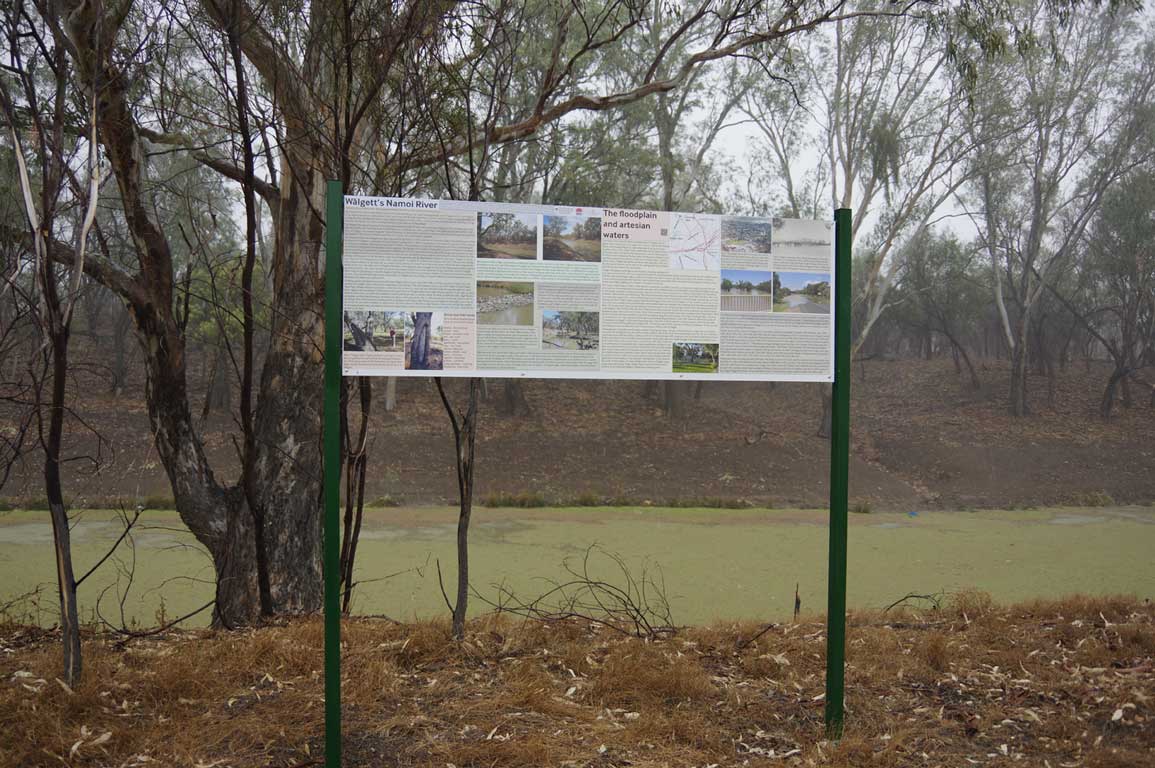 This is where many Aboriginal families lived in tin shacks (gundhi) beside the Namoi River until the 1950s. It is known as Montkeila Bend. Dharriwaa Elders Group has recorded that four or five families lived here - Murphys, Browns and Walfords. It is unknown today why, but in the 1950s after the large flood, the families moved to Nicholls Bend (now known as Namoi Village) and from then on, this part of Montkeila Bend was uninhabited. The DEG is erecting a picnic table here in early 2015 with a good view of the Namoi River weir, a popular fishing spot.

Located here is an interpretive sign about Walgett's Namoi River, the floodplain that Walgett is part of, and the artesian waters of this region.

The Walgett Aboriginal community has a special connection with the waters and catchment of the Namoi River, relying on it for drinking and in the past for its fish as an important food and lifestyle source. Until the late 1970s most Walgett Aboriginal people did not live in the town of Walgett, but camped along the Namoi Riverbank in tin humpies built from scrap iron sourced from the tip, and earlier in bark gundhi. Their lives revolved around the river and the rich biodiversity it supports.

The Namoi’s health has changed over time, impacted by agriculture, cotton, mining and manufacturing. It was listed as part of the Endangered Ecological Community for the Lowland Darling River in 2003 in recognition of its important acquatic habitat, and its current poor condition.

The Namoi River joins the Barwon-Darling River at Walgett, and together these rivers are part of a larger water system – the Murray Darling Basin. Surrounding Walgett are other tributaries of the Barwon-Darling River, Pian Creek, Pagan Creek, Castlereagh and Macquarie Rivers, ephemeral waterways like the Big Warrambool, wetlands (including the RAMSAR-listed wetlands at Narran Lakes and Macquarie Marshes) and significant artesian groundwaters of the Great Artesian Basin. The presence of water has nourished the Walgett region's biodiversity, and sustained many families. Not surprisingly today, it can be a source of division as competing interests with varying amounts of power contest responsible management of this vital natural resource.